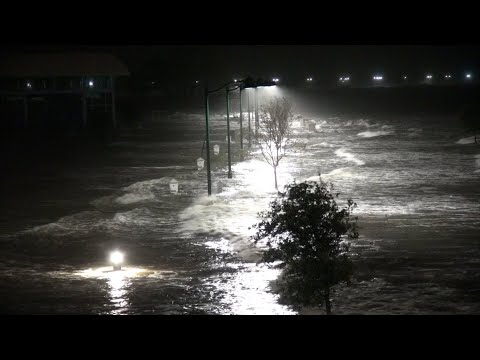 Archive footage from the interception and observation of category-one hurricane Nate in southern Mississippi near Ocean Springs and Biloxi (Harrison County) along Highway 90 late on October 7, 2017. This hurricane was a small and compact storm, and came in with winds weakening from 90 to 85 MPH. Nate was a storm that intensified in the SW Caribbean around October 5, crossing near Nicaragua and Honduras at that time. After getting away from land, it intensified SE of the Yucatan Peninsula early on the 6th, and became a hurricane in the southern Gulf of Mexico. Moving quickly north, hurricane Nate slowly strengthened up to its first USA landfall at the mouth of the Mississippi River during the early evening of October 7. Continuing north, and then recurving northeast, the storm came ashore a second and final time, near Biloxi, Mississippi as a category one hurricane. The storm packed a storm surge from 5-8 feet, mainly ahead and to the right of where the eye came in. A brief period of hurricane forced wind gusts and horizontal rain was encountered in this area, followed by the calm eye. A significant storm surge was also documented affecting the Golden Nugget Casino in Biloxi, with Highway 90 severely flooded. The storm passed on by midnight and early morning of October 8, and quickly weakened to a tropical storm over Alabama, then dissipated a day later over the Ohio Valley area of the United States on October 9. Damage was mainly powerlines, trees, and signs – But storm surge flooding along the path of Nates core was significant.