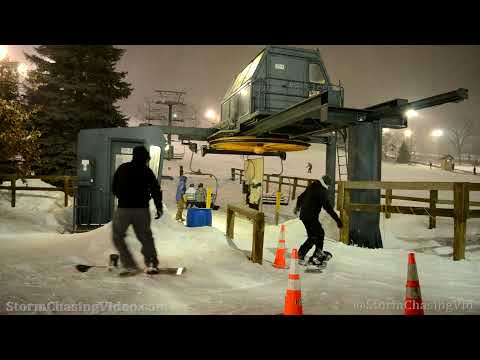 A winter storm is working across the Midwest this evening bring moderate to heavy snow, sleet, and freezing rain across the Twin Cities Metro. Crews were busy clearing the snow while the harsh conditions resulted in slow traffic and commuter head aches. Some did try to take advantage of the fresh new powder by hitting up the local area ski hills including Buck Hill in Burnsville, MN.
Shot Description

Shots 1-4: Strong wind gusts blowing snow through the IKEA flags and spot lights.
Shot 5: Minnesota State Plow Truck drives by with IKEA and IKEA flash in background.
Shot 6-7: Moderate snow falling and being blown as the IKEA sign glows in the background both medium and wide.
Shot 8: Mall of America plow truck clearing snow from a lot across the street from the IKEA and Mall of America as moderate snow continues to fall and blow around.
Shot 9-10: Various shots from Buck Hill Ski Hill in Burnsville, MN of people skiing, snowboarding, moderate to heavy snow falling and blowing around, people getting on ski lifts. Shot close, medium, and wide.
Shot 11: Moderate snow falling being light up by lights in trailer sale lot.
Shot 12: Shot outside of the Mall of America -Nordstorm of a car leaving the mall in moderate snowfall and blowing snow.
Shot 13: Wide shot of cars waiting for light to go green leaving the Mall of America and then turning as plow truck is plowing the IKEA lot in the background.
Shot 14-15: Wide and close shots of cars leaving Mall of America in moderate snowfall
Shot 16: Zooming out shot of vehicles leaving the Mall of America in the moderate snow fall
Shot 17-18: Sidewalk sweeper coming out of the ramp in the first scene and then in the second scene clearing the side walk of snow while snow is still falling.
Shot 19: Car leaving Mall of America but turning a little too fast and skidding as they turn.
Shot 20: Snowy conditions as I pass highway sign saying Minneapolis 35W or St Paul 35E in Minnesota.
Shot 21: Couple shots of very slow traffic and cars/semi trucks driving with their hazards on due to slow conditions.