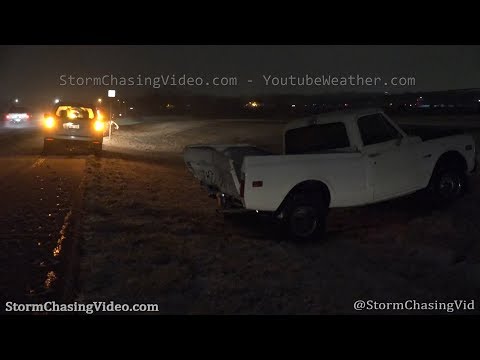 More snow moved into Kansas during the evening hours on Thursday with minor accumulations of snow reported in eastern portions of greater Wichita. Snow came down heavy enough at times to cause some minor traffic issues. Winter Weather Advisories were issued across portions of eastern Kansas, and this is the second day in a row for snow in Wichita.

Scenes 1-10: Multi-car wreck southeast of Wichita near the town of Derby, three cars involved. No one was injured.

Scene 14: Wide shot of heavy falling snow over a parking lot at the onset of the storm in west Wichita.

Scene 22: A large bird (Egret maybe) standing in a pond looking less than thrilled as snow falls around it.

Scene 23-25: Shots of bundled up people in a parking lot.