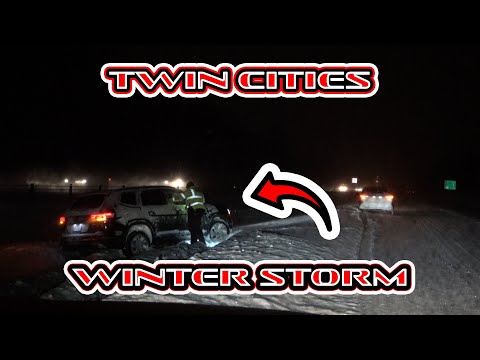 Moderate to heavy snow fell across the Twin Cities throughout the day, leading to very slick conditions by the evening timeframe as air temperatures hovered around 0F. The very light nature of the snow caused reduced visibility as the snow was already beginning to blow around. The following clips were from around the Apple Valley, Minnesota area, a southern Twin City suburb.
Shot Description

00:00-00:11 Sign stating “Winter Storm Warning in Effect” as emergency lights are flashing in the background from a car that had driven off into the ditch on I-35E.
00:11-00:36 Video passing two Minnesota State Patrol cars and a tow truck working to get a car out after it got stuck in the middle median on I-35E.
00:36-00:41 Sign with “Winter Storm Warning in Effect” on it again with cars with hazards on in the background as heavy snow continues to fall.
00:41-00:51 Close-up video of an SUV stuck in the ditch after losing control on a patch of ice on I-35E.
00:51-01:04 Video of Minnesota State Patrol officer checking on the occupants of the car that was stuck in the ditch.
01:04-01:25 A couple of clips of the MnDOT plow gang clearing the southbound lanes of I-35 in the background with the car in the ditch in the foreground.
01:25-01:40 A couple of clips of a vehicle stuck in the ditch while traveling southbound on I-35 during heavy snow and blowing snow.
01:40-02:01 Various clips of two cars disabled in the turn lane from Cedar Ave in Apple Valley, Minnesota with an Apple Valley police officer aiding them.
02:01-02:07 Video of a sign saying “Winter Storm Warning in Effect” with reduced visibility from heavy snow falling and blowing.
02:07-02:28 Video of reduced visibility as heavy snow and blowing snow really begin to impact the travel conditions around the Apple Valley, Minnesota area traveling northbound on 77 (Cedar Ave).
02:28-02:38 Video behind a MnDOT plow clearing snow from an on-ramp and the shoulder of southbound I-35 near Apple Valley, Minnesota with almost zero visibility from the blowing snow behind the plow.
02:38-03:03 Several clips of a man shoveling snow from under and around his car in the Walgreens parking lot in Apple Valley, Minnesota.
03:03-03:37 Various clips of people clearing several inches of snow off their vehicles after they were sitting in a parking lot all day. The clips were captured from a Walmart parking lot and a Kwik Trip gas station parking lot in Apple Valley, Minnesota.
03:37-04:01 Several clips of a bobcat and front loader are used to clear snow from a parking lot and push it into large piles in Apple Valley, Minnesota.