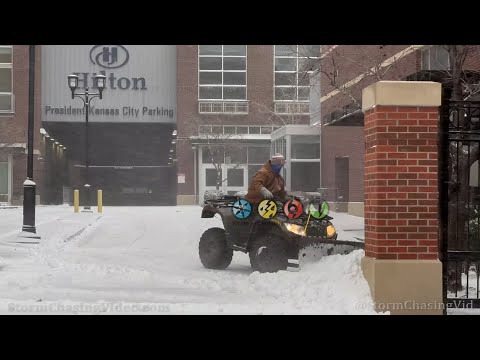 The winter storm arrives in Kansas City, Missouri bringing frigid temperatures, heavy snow, and strong winds that resulted in blizzard-like conditions to the city. Around 3″ of snow fell in Kansas City, while residents battle the elements before the holiday weekend.
01:41-01:49 Video of a plane from the Kansas City International Airport beginning to take off as blinding snow is blowing in the background and snow is falling in the foreground.
Shot Description

00:0-00:08 Video of the Metropolitan Community College – Penn Valley sign showing a temperature of 3F in Kansas City, MO as snow is falling and blowing.

00:08-00:17 Video from the Kansas City International Airport of people walking their luggage from the bus stop to the terminal in heavy, blowing snow.

00:17-00:24 Video of an American Airlines flight waiting to take off as snow continues to fall and blow around.

00:24-00:46 Wide and close shots from the departures section of the Kansas City International Airport as heavy snow is falling and traffic and buses pass by. The second shot is a slower shot outside Southwest gates with heavy snow falling, traffic driving by, and a traveler struggling to drag their bag on the snow-covered ground.

00:46-01:02 Video of heavy snow falling on northbound 169 as blizzard-like conditions are ongoing resulting in reduced visibility and a travel headache for any travelers on the roads.

01:02-01:11 Overview shot of the highway as snow is falling and blowing in downtown Kansas City at the 70-670 and I-35 split. Roads are covered in snow as traffic drives by below.

01:11-01:25 Video of a sidewalk being plowed by a four-wheeler at the Hilot President Kansas City Parking garage as snow continues to fall. The snow blowing in the foreground.

01:25-01:41 Video from downtown Kansas City of a metra bus leaving with pedestrians walking in the background as snow continues to fall and blow downtown.