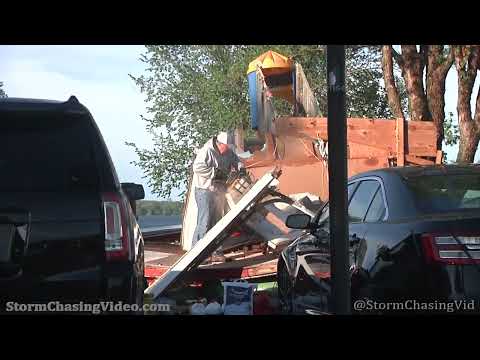 A moderate risk day with a Particularly Dangerous Situation Tornado watch led to multiple reports of tornadoes and damage in central Minnesota. Video is shot from West Central Minnesota with damage and storm clouds from this area. It includes shots from Ten Mile Lake, which was hit very hard with a garage destroyed down to its foundation.
Shot Description

TRT 2:20
Shot 1: Interview with Gus Proudfoot, who had his house damaged by an apparent tornado at Ten Mile Lake, MN (Near Fergus Falls, MN)
Shot 2: Continued interview with Gus with shot of garage wiped from foundation.
Shot 3: Person surveying the damage with what is left of the garage in the trees.
Shot 4: Shed and garage debris with person walking on the garage.
Shot 5: Semi tipped over on Interstate 94 near Fergus Falls, MN
Shot 6: Damage in Ashby, MN with people looking at the damage.
Shot 7: Chainsaw and damage cleanup of garage which was destroyed.
Shot 8: Shot of leading edge of storm near Alexandria, MN just before the tornado passed.
Shot 9: Wall Cloud approaching – near Alexandria, MN
Shot 10: More damage cleanup with shot of garage slab.
Shot 11: Trees down in multiple directions near Ashby, MN
Shot 12: House with a tarp and tree on it.
Shot 13: Car with debris stuck under it.
Shot 14: Irrigation System toppled near Ten Mile Lake, MN
Shot 15: Another irrigation system twisted and moved near Dalton, Minnesota