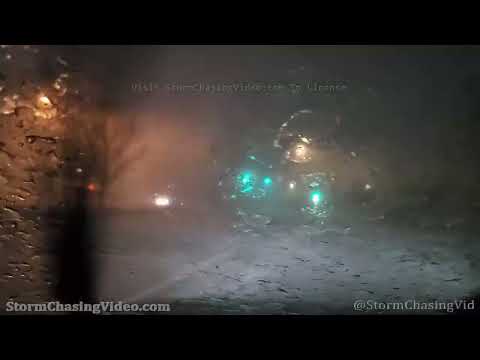 A line of severe storms rolled through the Twin Cities on the evening of May 11, 2022, prompting several tornado warnings and severe thunderstorm warnings to be issued. Strong winds, hail, and very heavy rain resulted in flash flooding all across the Twin Cities Metro. Additionally, these storms produced very vibrant lightning strikes all across the region.
Shot Description

00:00 Clips of very heavy rain falling with strong winds blowing and hail hitting the front window of the car. You can see the head lights of vehicles driving in the opposite direction through as their head lights light up the sideways blowing rain.

01:10 Vehicles stopped on the highway and backed up because of the dangerous driving conditions as the squall line worked across the region.

01:15 Flash flooding from the very heavy rain caused water to build up on the roadways. Video driving through the flash flooding on the highway.

01:23 The very heavy rain resulted in water spilling into the garage space underneath an apartment building in Eagan, Minnesota. It also was seeping through the walls and ponding at the base of the parking garage.

02:01 Several shots of stunning lightning that this squall line produced as it worked across the Twin Cities region from Eagan, Minnesota. Opening scene is of an apartment building being struck.