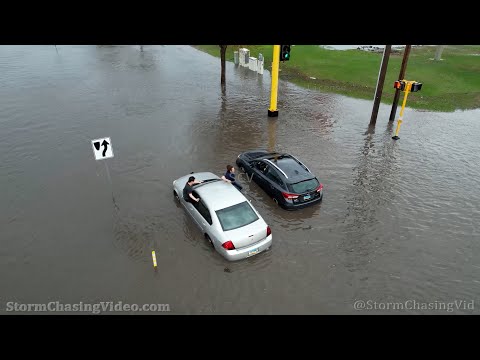 A swath of thunderstorms dropped heavy rainfall amounts very quickly this morning to already saturated Fargo, ND. Flash flooding turned one intersection into a lake and rushed morning commuters attempted to drive through it, many were unsuccessful, and forced to push their vehicles out of the high water.

Intersection of 15th Street and 32nd Ave South in Fargo.
Shot Description
1) A sedan driving through very high water in flooded intersection
2) Another sedan stalled with wake from other vehicles crashing into it
3) A city worker checking on a motorist in high water
4) Vehicles driving in high water
5) Aerial view of passengers exiting their vehicle through windows and pushing
6) A woman pushing her car out of the water
7) A good Samaritan voluntarily entered the high water to push out a strangers car soaking their clothes and shoes
8) A motorist pop his hood without shoes on to check things out after stalling
9) Drone aerials of cars driving in high water creating wakes.
SID: Jason Bednar