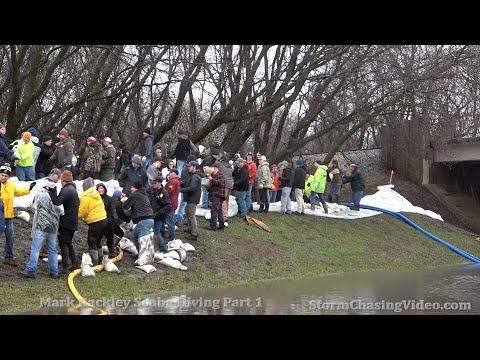 The Red River Valley on the border of Minnesota and North Dakota has several flood warning in effect from the recent storms along with snowmelt. The Red Lake River at Crookston, MN is at major flood level today (4/24/22) at 26.25 feet with an expected crest Monday (4/25/22) afternoon of 28.5 feet which could overtake the record of 28.4 feet set during the disastrous RRV flood season of spring 1997. The city is well protected up to 31 feet, but several low lying areas are in danger and hundreds of volunteers were out sandbagging today to protect those areas.
Shot Description

1) Welcome to Crookston
2) Several clips of volunteers sandbagging via the human chain method. They are trying to save the Crookston Fire Department which sits in a low area on South Main Street. An earthen dyke is also being used in front of the fire department seen later in the video with a bulldozer on it.
3) Drone clips over the city of Crookston showing the Red Lake River in close proximity to its banks.
4) Red Lake River on the east edge of downtown, very high and very fast.
5) Earthen dyke being built in front of the Fire Station.
6) Sandbags and backup earthen dyke on the north side of town. Homes on the wrong side of the earthen dyke are at risk should the river overpower the current protection in place.
7) Pumps are running all over the city trying to return breached water back into the river.