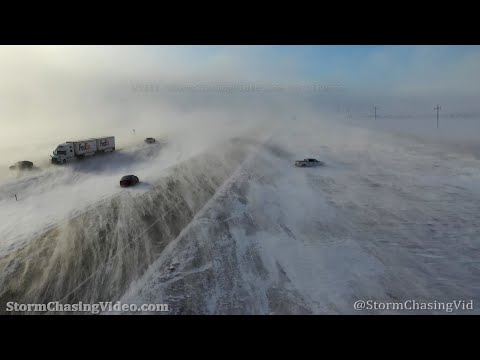 A treacherous blizzard created extremely hazardous travel this morning in Fargo, ND, especially along Interstate 29 which is now finally closed. Video shows unique aerial angles via drone of the blowing snow crossing I-29 on the southern edge of Fargo, with several vehicles stuck in the median and ditch as other vehicles slowly travel along. One vehicle on the north side of town on I-29 was lucky to find a tow truck willing to travel and get them out. The video also includes some wild winds inside city limits in north Fargo and a look at what commuters dealt with on I-29 early this morning trying to drive north out of Fargo.
Shot Description

1) Drone clips of the blizzard on I-29 on the southern edge of Fargo, ND and ground clips, several vehicles left the roadway and were stuck in the median and ditch.

4) I-29 early this morning showing what some commuters ran into trying to get to work. One vehicle was stopped in the middle of the Interstate, others almost missed their exit, wanting to get off the Interstate.