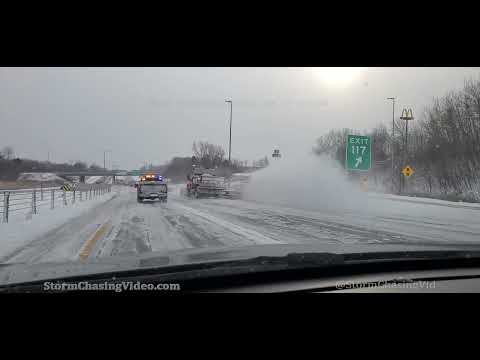 Light to moderate snowfall and strong winds led to slick conditions and reports of several wrecks across the Twin Cities Region on Wednesday. MN DOT was busy trying to keep up with the conditions with snow plow convoys being one of the main methods they use to clear the interstate highways. The following video was from one of those snow plow convoys between Lino Lakes and Vadnais Heights, Minnesota along southbound Interstate 35W.
Shot Description

Shot 1: MN DOT Plow trucks passing by as an American flag waves in the background backlit by sun peaking through the clouds.

Shot 2-3: Multiple MN DOT plows passing and plowing with reduced visibility due to the blowing snow behind the plow.

Shot 4: Plow putting side wing down and throwing snow off the shoulder and reduced visibility.

Shot 5-end: Several clips of plow working the shoulder passing street signs, avoiding them and throw snow off the shoulder.