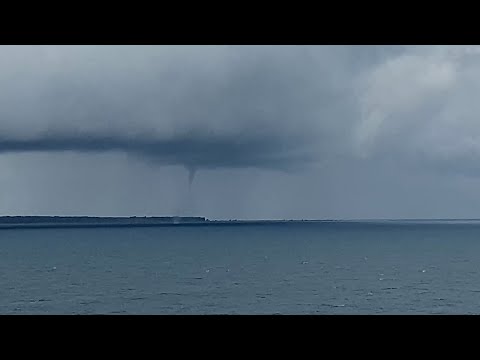 Storms At Sea, footage so several Water Spouts or Tornadoes over water in the Maintou Passage near Sleeping Bear Dunes National Lakes Shore which is in the northwest part of Southern Michigan.

Footage shows three Water Spouts at the same time along with footage of Water Spouts between the large freighter and the coast of Michigan.

The huge salt water freighter that is operating in the Great Lakes was in no danger at any time but smaller vessels such as smaller fishing boats, sail boats and recreational craft in the area needed to take shelter from the storm and Water Spouts.
Shot Description

00:00 – Sailing on Lake Michigan and a Water Spout Tornado drops from the clouds and touches down ahead of the ship on the Port Side (left side).

00:20 – Second Water Spout forms just off the coast and touches down over the water.

00:38 – Second Water Spout continues off the coast under the wall cloud with the shoreline visible in the distance.

01:03 – Three Water Spouts at the same time dropping down from the clouds along the side of the ship.