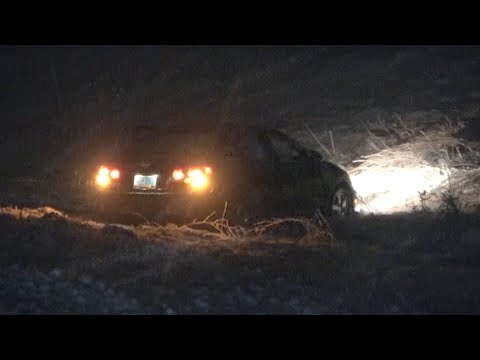 The northern end of the severe weather that hit the Midwest on Saturday brought several inches of extremely heavy wet snow to central Minnesota around the City of Saint Cloud and greater Stearns County.

With the Covid19 pandemic, the MNDot Snow Plows where not out in full force for this late season storm until after the roads where covered in heavy wet slush snow.
Shot Description

Clip 1 Car in the ditch trying to get out on Interstate 94.

Clip 2 Car being pulled out by a tow truck on Interstate 94.

Clip 3 Car stuck deep in the ditch on Interstate 94.

Clip 4 – 5 Semi Truck stuck in the center ditch with State Troopers and tow company on scene.

Clip 6 American Flag and State of MN Flag blowing in the heavy snow.

Clip 9 Passing several cars in the ditch and a tow truck pulling them out.

Clip 10 Semi Truck in the ditch.

Clip 11 State Patrol and tow truck with a car in the ditch.