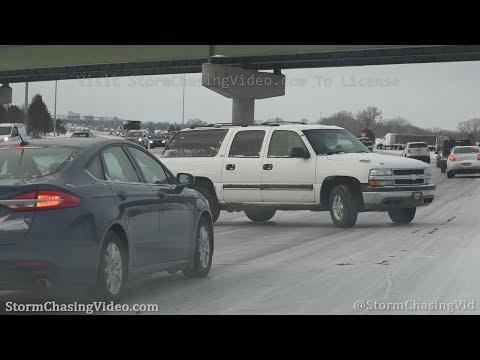 Snow and ice lead to a nightmare morning commute as dozen of accidents occurred across Wichita-area highways leading to the closure of several major routes in the city for several hours during the morning. Cars were scattered all over the area as many slid off roads and crashed. Snow totals were less than 2-inches in the city, but the ice made for an extremely hazardous commute.
Shot Description

Clip 1: White SUV trying to get traction near a crash scene slides sideways in front of the camera right on I-235.

Clip 2: White SUV gathering itself and turning straight down I-235.

Clips 3-4: The two car crash involving a pickup truck and a black car in the median of I-235 where the SUV slid sideways in previous clips.

Clips 5-6: POV windshield shots of white pickup truck spinning tires trying to get up a hill.

Clip 7: POV windshield shot as camera person drives car and gently nudges the truck from behind to help it get up the hill.

Clip 8-11: Shots of vehicles struggling to get up an icy hill near I-235 in west Wichita. Shots include tight shots of cars spinning tires along with wider views as multiple vehicles are struggling or stuck.

Clips 15-17: Police SUV and tow truck at scene of a single vehicle crash involving a blue pickup truck off the side of I-235.

Clips 18-22: Two vehicle crash involving a church bus and a gold car at the base of an off-ramp from I-235.

Clips 32-34: Backup on the ramp with a police officer showing up and walking car-to-car behind the FedEx truck and white car.