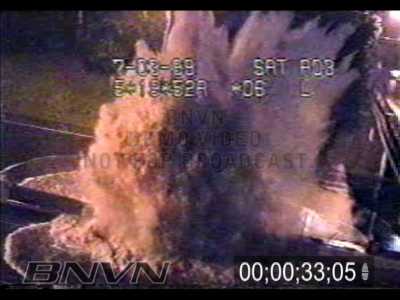 Click on the image above to watch the video.

Back in July of 2004, we shot footage of an explosive storm sewer on Interstate 35W and 35th street in Minneapolis, MN.  Since then we have been getting requests for another video that was shot by a traffic camera in 1999 of the same thing happening and causing an accident.  After a lot of searching, we finally found the footage.

This video from 07/03/1999, from the traffic camera on Interstate 35W and 35th Street catches the explosive storm sewer happening several times over a few minutes and even has the accident caught on tape where a pickup truck drives into a massive storm sewer cover that was blown off the opening. The storm sewer would get large amounts of air trapped in the system during heavy rain causing it to push the water back up the storm sewer system and exploding straight up in the air like a geysers.

Click here for the direct link to the video http://www.projectstormfury.com/videoplayer/detail.php?id=1311