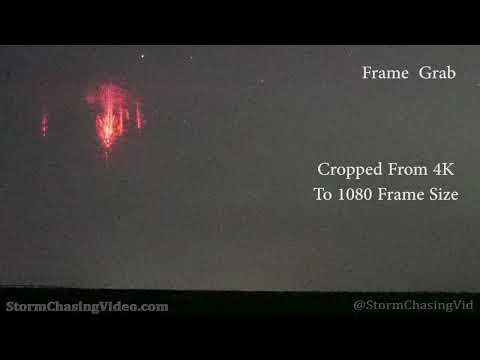 Early this morning, 7/23/2022, we captured an extremely rare event on camera. While a KP4 to KP5 solar storm was ongoing that was producing some average Aurora Borealis or Northern Lights for the northern United States and Canada, a severe thunderstorm was moving through the Grand Forks, North Dakota area. The severe thunderstorm produced one of the more rare events to be caught on video, a Red Sprite while an active aurora event was on going.

On the right side of the video was the green glow from the Aurora Borealis green arc and on the left side of the screen a Red Sprite shot up form the top of the severe thunderstorm. The approximate distance between the camera and the storm was 175NM as the camera was just north of Saint Cloud, Minnesota. The video shows the normal speed and the slowed down 50%, 25% and 5% speeds along with still frame grabs and cropped in from 4K to 1080 screen size.