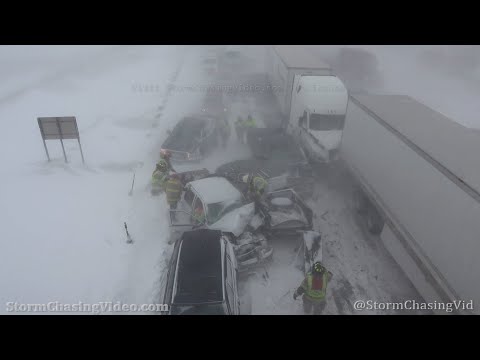 Several vehicles and semis were involved in a pile up accident on westbound Interstate 94, two miles east of Casselton, ND, under the 158th Ave SE overpass. Extreme whiteout conditions were happening at the time of the accident eventually warranting a blizzard warning from the National Weather Service office out of Grand Forks, ND. according to North Dakota Highway Patrol reported several injuries.

Casselton Firefighters and Cass County emergency workers were seen attempting to remove a pinned victim by cutting the truck’s entire top off in blizzard conditions accompanied by -30F wind chill. I counted at least 10 vehicles with significant damage with several others stuck on now closed I-94. The ND State Highway Patrol reported several injuries to local media.
Shot Description

1) Several clips of Casselton, ND, Firefighters on scene using heavy equipment to remove the top of a pickup with a pinned victim on Interstate 94 just east of Casselton.
2) Top of truck was removed, many firefighters surrounded the vehicle and entered from above to attend to the victim.
3) On the west side of the overpass there were four more vehicles where the accident began, two semis, a flat bed truck, and a pickup
4) Final clip shows the conditions on I-94 near Mapleton, ND, an idea of what the vehicles involved in the accident were traveling in.