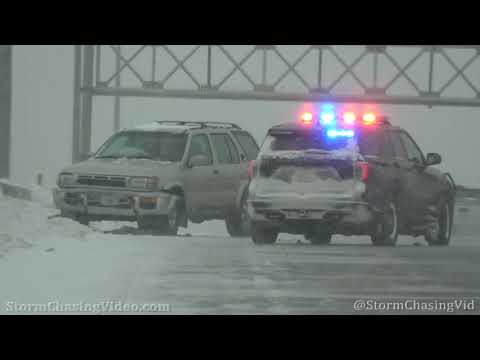 This incredibly historic winter storm continued its assault in southern Kansas this morning adding another inch or more of snow during the Monday morning commute. Traffic was lighter than normal thanks to the holiday, but icy conditions and low visibility lead to a few issues.

Temperatures yesterday shattered record lows with Wichita recording -7, beating the 1936 record of -4 for the date (Feb 14).

The record low for Feb 15th was already shattered at midnight, but not officially recorded as of late this morning. The previous record was -5 in 1936, so far Wichita was -8 with wind chill values around -30.

Wichita has not been above the freezing mark in over 8 days and counting.
Shot Description

Clip 1: Approaching a spinout with cops on scene as a grey SUV recovers from its own slideoff directly behind the crash.

Clip 5: Tight shot of side of police SUV as snow falls.

Clip 14: Shot through heavy falling snow of US-400

Clip 20-21: Pre-dawn shot of a slideoff into a snowbank from an exit ramp.

Clip 22-24: Fire fighters on scene of a small house fire in northwest Wichita in the pre-dawn morning hours.

Clip 25-26: POV driving shots following a snowplow on a city highway in the pre-dawn hours.