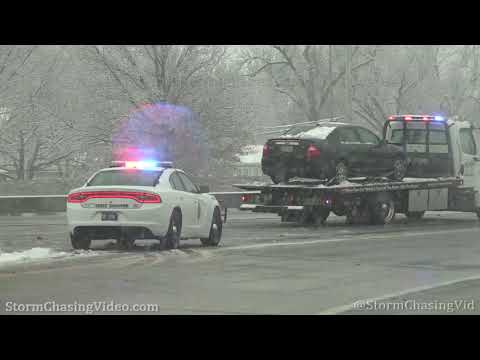 The heaviest snow of the season fell in Wichita Wednesday afternoon, peaking out during the morning rush hour. Snow was still falling at the time of upload, but over 2-inches have been reported in various places across Greater Wichita. Fortunately mild temps leading into this storm kept roads mostly wet, but the snow was enough to cause some wrecks and very slow traffic during the morning rush. A WINTER WEATHER ADVISORY remains in effect until midnight tonight as more snow and potential flash freezing is possible into the evening and overnight.
Shot Description

Scenes 1-7: Various clips of a multi-car wreck in the clean-up stages near Seneca and I-235. Tow truck has a severely damaged vehicle on the bed and cops have the right lane on Seneca blocked off with two other damaged cars.

Scenes 8-10: Shots of a tan car slide off from I-135 as interstate traffic passes behind it.

Scenes 16-17: Tow truck takes damaged vehicle from crash sight off I-135 in Wichita.

Scene 18-22: Various close shots of snowplows clearing snow from I-135.

Scene 24: POV driving shot of a long line of traffic on K-96 in north Wichita.

Scene 28: School busses and other cars on the roadways in very heavy falling snow.