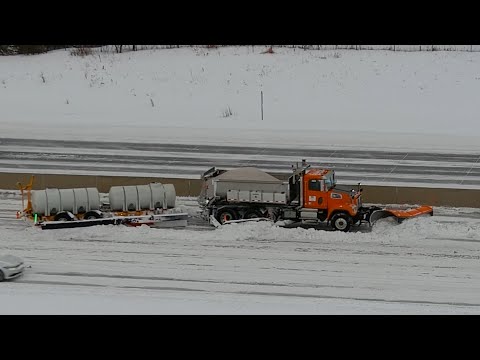 It was a pretty fast moving storm system where at times for a few hours the weather was brutal with white out conditions making the roads hazardous to drive on.

Footage from during the storm and after the storm.
Shot Description

00:08 – A pickup truck that spun out and getting a push from a BobCat snow removal machine in Minneapolis.

00:20 – Side view after the heavy snow ended of MnDot Gang Plow on Interstate 694 in Maple Grove.

00:36 – Drone video of the Gang Plow on 694 at the 494 and 94 Interchange in Maple Grove, showing the huge snow plow trailer rig moving tons of snow. Conditions at the time of the video was over 2SM visibility.

01:37 – Dash camera in the storm on Interstate 94 in Maple Grove of the whiteout conditions.

01:47 – Various Clips in Downtown Minneapolis of people and traffic in the snow.

04:25 – Dash cam of snow plows in front in Maple Grove and a car spun out in the snow bank.

04:44 – Several more clips after the snow end of Jack Knifed Trucks and cars in the ditch along Interstate 94.