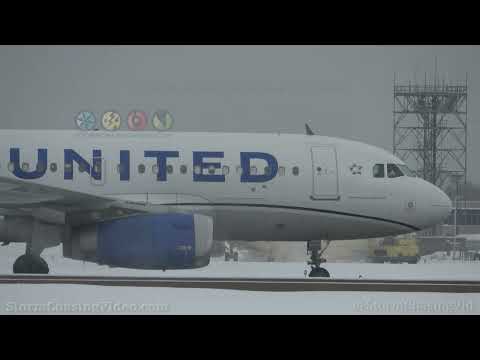 A band of very heavy snow worked across the Twin Cities just after noon on January 3, 2023. Snowfall rates of 1.5-2.0 inches an hour were falling, resulting in visibilities being reduced to less than a quarter of a mile at times. Several inches of snow fell in a short period of time, which resulted in a travel nightmare both on the roads and in the air. The following video was captured around Apple Valley and Minneapolis, Minnesota, during and after this heavy band of snow.
Shot Description

00:00-00:28 Several clips outside of Target in Apple Valley, Minnesota of customers walking into and leaving the store in heavy snow along with employees of Target attempting to clear the walkway in front of the store.

00:58-01:06 MnDOT sign with “Winter Storm Warning” on it has heavy snow is falling on northbound Hwy 77 in Apple Valley, Minnesota.

01:06-01:20 Two clips of vehicles stuck in the heavy snow. The first clip is on 494 near the MSP airport with a car and truck stuck with the Minnesota State Patrol there. The second clip is of three vehicles stopped to help get a car unstuck near Mall of America.

02:03-02:21 Two clips of a Delta plane landing at the Minneapolis-St Paul International Airport in the background with crews working to clear the runways in the foreground.

02:21-02:36 Clip of crews at the MSP International Airport working to clear the runways in the foreground with a Delta plane taxing in the background after landing.

02:36-03:04 Two videos of a FedEx truck getting stuck trying to leave the MSP International Airport with the second video of a Good Samaritan stopping to provide assistance pulling the semi-truck out.

03:28-03:47 Two clips of crews clearing the taxiways and airport at MSP International Airport.

03:47-04:01 Two clips, one close and one wide, of a large America Flag waving in the wind as very heavy snow is falling in Apple Valley, Minnesota.