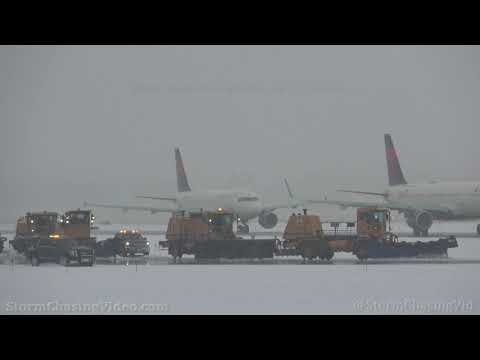 A strong winter storm brought several inches of heavy wet snow across the Twin Cities region which brought travel headaches all across the region. The following clips were captured around the Minneapolis-St Paul International Airport and Apple Valley, Minnesota during the morning of December 15th following heavy snow that fell early that morning.
Shot Description

00:00-00:09 Clip of a school bus losing control as it tries to turn into a subdivision with a car stuck in the road in the background.
00:09-00:17 Clip of a black car stuck in the road that has a slight incline due to the heavy wet snow that fell this morning.
00:17-00:22 Clip of kids playing in the snow while they wait to be picked up by the school bus as another bus pulls into a daycare across the street.
00:22-00:47 Couple of clips of Delta airline planes being de-iced. The first clip is a close-up while the second clip is a wider shot with a Delta transportation bus driving by in the foreground with planes being de-iced in the background.
00:48-01:24 Three clips of Sun Country airplanes being de-iced. The clips are a variety of close and medium shots.
01:24-01:45 Three separate clips of MAC crews clearing snow from the runways and side roads with planes sitting in the background waiting to take off after being deiced.
1:53-02:00 Clip of a Delta plane landing while another Delta plane is waiting to take off.
02:00-02:09 Wide shot of a MAC crew waiting to clear the runway with a FedEx plane in the waiting to take off and another plane landing in the background.
02:09-02:34 Close and medium shots of the MAC crews waiting to clear the runways as planes in the background slowly move forward in line to take off.
02:34-02:55 Two clips, one close and one wide, of planes landing at the Minneapolis-St Paul International Airport as snow continues to fall.
02:55-03:07 MAC crews begin to clear the main runway at the Minneapolis-St Paul International Airport.
03:07-03:17 Clip of a plow truck clearing a side road at the Minneapolis-St Paul International Airport as Delta planes are de-iced in the background.
03:17-03:54 Two clips of MAC crews coming back from one side of the runaway, turning around, and then going back to make another pass.