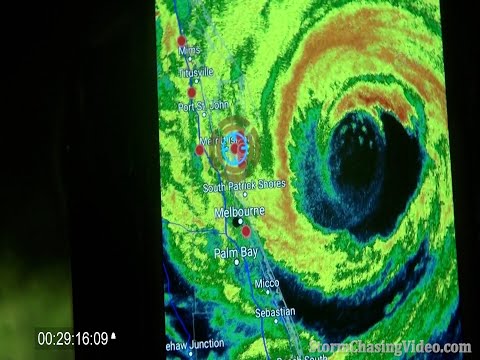 The interception of Hurricane Matthew in the Cocoa Brach / Cape Canaveral area of the Florida “Space Coast” from October 6 to October 7, 2016. The storm western eyewall passed near or over this area, with winds gusting over 100 MPH during the night. Matthew began as a tropical wave that originated off the coast of Africa, and moved across the Atlantic basin. The storm turned north, passing east of Jamaica, and severely impacting SW Haiti and the tip of eastern Cuba with devastation and loss of life as a category 4 storm. While over the open Caribbean sea, the storm reached 160 MPH (category 5), making it the first storm of that intensity since 2007. After hitting Cuba, the storm re-emerged over the Bahamas and continued NW and eventually northward, brushing the FL east coast as a category 3 / 4 storm, and making landfall in south Carolina as a weaker (category 1) hurricane during the morning of October 8.

The main interception was done overnight on October 6-7 near and south of Port Canaveral.