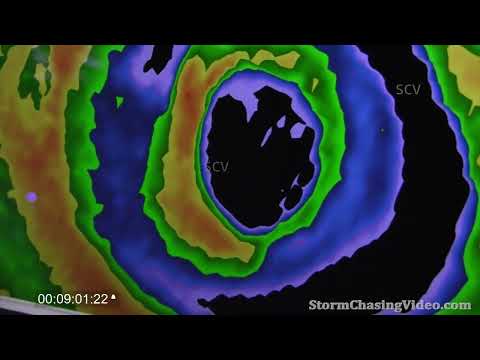 Full archive footage from Chris Collura of the Hurricane Maria interception and observation of powerful category-four (borderline 5) hurricane in southeastern Puerto Rico from its landfall on September 19 and 20, and subsequent destruction and aftermath.

Hurricane Maria was a powerful hurricane that made its way across the Atlantic from the Cape Verde Islands off Africa in the middle of September 2017. East of the windward islands, it quickly intensified, and reached category 5 strength, with 160-165 MPH winds, and struck Dominica during the night of September 18. After devastating the islands, it continued WNW towards Saint Croix and Puerto Rico a day later, reaching a staggering 175 MPH as it approached Puerto Rico. Eyewall replacement and concentric eyewalls caused the storm to weaken a bit, but widen to a larger storm with 155-160 MPH winds as it made landfall just before dawn near El Negro, Puerto Rico on September 20. The storm ripped across the island in a diagonal path, from southeast to northwest, exiting northwestern Puerto Rico as a strong category 3 storm with 120 MPH winds early on the 21st. After striking Puerto Rico and clearing the Island, the storm went back out to see to the north of Hispaniola and brushed the Turks and Caicos Islands around the 22nd. The storm began moving northward, and passed east of the Bahamas and US East coast from the 23rd onward. Continued weakening occurred to east of the USA coast, and became a tropical storm late on the 26th (or early 27th) of september. Moving slowly, but eventually re-curving out to sea, Maria continued weakening and became extra-tropical, ending its week and a half rampage across the western Atlantic.