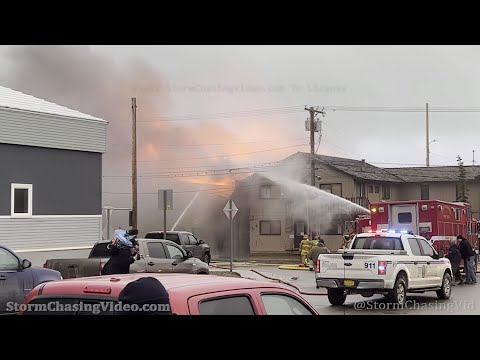 A fire broke out this evening at the Bering Sea Bar and Grill in downtown Nome, Alaska which is on Front Street. It is reported that residents in the area of the building heard several explosions before seeing the restaurant completely engulfed in flames. What started the fire is not known at this time, but locals are saying several propane tanks have exploded due to the fire and they are spraying embers all over town. The Nome Volunteer Fire Department reports they are in the process of demolishing the building in order to contain the fire and prevent it from spreading to neighboring buildings as 30-50 mph winds from the Remnants of Typhoon Merbok continue to impact the city of Nome, Alaska. There are some unconfirmed reports that some of the fire might have spread to the Nugget Inn on the west side of the Bar and Grill.

Additionally, video was captured this afternoon as the Nome Sound Observation station in Nome, Alaska reached a peak water level height of 10.52 feet around 12:06 PDT, or 2:06 CDT, on September 17, 2022. The storm surge videos were captured between 2-3 PM when this peak water height occurred. In the video, you can see several feet of water across various areas and more continuing to surge inland across the coastal area.
Shot Description

00:00 Video of rough seas from the Bering Sea crashing over the sea wall and flooding the foreground along Front Street in Nome, Alaska.

00:16 A couple of clips of the Bering Sea Bar and Grill completely engulfed in flames shooting out of the top of the building with rescue vehicles in the foreground and water being sprayed on the fire in the background.

00:56 Fire truck with lights and sirens showing up at the scene of the fire as smoke can be seen filling the sky in the background.

01:11 Clip of firefighters putting water on the fire in the background as others set up fire hoses in the foreground, and another firefighter is getting dressed behind a fire truck.

01:53 Wide shot of Bering Sea Bar and Grill completely engulfed in flames with residents in the foreground watching from a distance and fire crews spraying water on the fire.

01:59 Video of firefighters activity trying to put the fire out at the Bar and Grill from the front door.

02:17 Video of smoke billowing over the Anvil City Square with a church in the background.

02:53 Video of smoke billowing in the background over the city with locals driving around in the foreground.

03:11 Couple of clips of heavy smoke as firefighters continue to fight the fire at the Bar and Grill with a firefighter walking around in front of the burning building.

03:47 Panning shot of the storm surge rushing into the harbor in Nome and flooding the street as residents walk up to the edge of the flooding and admire it.

04:03 Medium shot of rough Bering Seas in the background as the storm surge rushes down the front street in Nome.

04:19 Panning wide shot of the flooded harbor as strong winds continue to blow and the storm surge floods the foreground.

04:36 Wide shot of the rough Bering Seas crashing over the sea wall and the storm surge rushing down the front street in Nome.