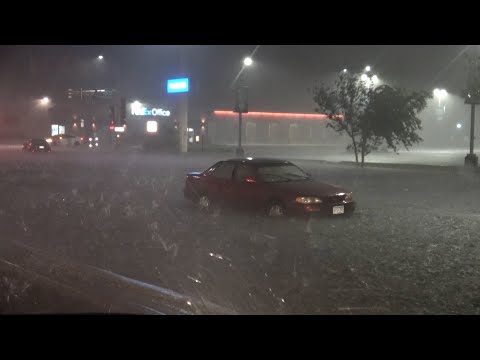 Urban Flash Flooding and Large Hail from training storms that keep forming near Saint Cloud, MN overnight. The storms started up just before midnight and the heavy rain persisted for several hours which led to numerous roads around the city becoming flooded.

To make matters even worse, large hail started to fall as another storm cell moved over the area and dropped 1″ (one inch) hail on top of flooded vehicles.

Footage ends with a suspect looking cloud formation on the north side of Saint Cloud as the storms moved in to what looks like a funnel cloud.
Shot Description

00:48 – Large hail falling at our home a few blocks away from Highway 23 and Division.

01:48 – Various clips of the flooding and stranded vehicles around Saint Cloud after midnight.

04:33 – Two real time clips of vivid lightning in the sky that is no stop flashing and then something suspect lowers from the sky in the distance. Funnel Cloud or Inflow, not sure but it was very suspect to watch before it rapidly fell apart.