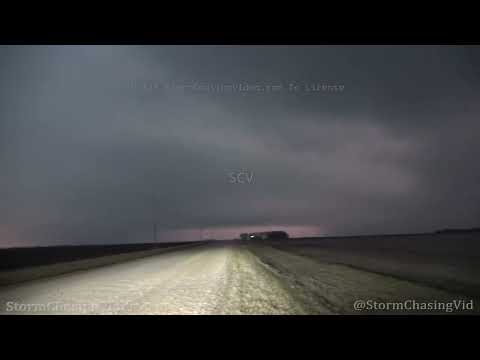 A primed environment for robust strong to severe storms was in place across north-central Iowa allowing for the development of this long-lived supercell that ended up producing several confirmed tornadoes. The following clips are from this supercell has it tracked across Goodell, Clear Lake, and Mason City, Iowa as the storm was transitioning into a high precipitation storm that had a confirmed rain-wrapped tornado. The strong inflow winds even resulted in a semi-driver losing control and driving into the middle median on I-35 southbound.
Shot Description

00:00 Several clips of a semi-truck that lost control due to very strong inflow winds and reduced visibility and rain off the road and into the middle median on southbound I-35 just north of Clear Lake, Iowa.

00:50 Clip of the high precipitation supercell near Goodell, Iowa as a tornado warning was issued and cellphone tones off alert.

01:04: Several wide shots of the tornado warned supercell working toward I-35 near Goodell, Iowa.

01:27 Medium, close, and panning shots of the tornado warned supercell near Goodell, Iowa with lots of lightning occurring.

01:48 Wide panning shots of the overall tornado warned supercell with lightning flashing all around the storm.

02:13 Close-up shot of an area of lowering in the tornado warned supercell with a truck stopped in the foreground with lots of lighting flashing.