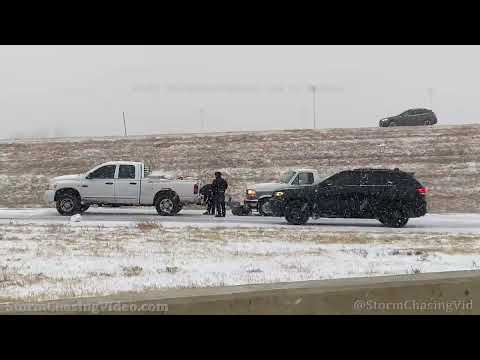 A large winter storm impacted a large portion of central United States today including Oklahoma City, Oklahoma with estimated snow totals around 4-6″ so far. This storm is to blame for very slick conditions and several wrecks all across the state. The following video is from around the Oklahoma City area and includes scenes of wrecks, crews clearing the roads, winter scenes, and more.
Shot Description

Clip 1-3: Scenes over looking I-40 in Oklahoma City with slow traffic driving on snow covered roads, with one scene of a blow truck blowing the far right lane.
Clip 4: ATV doing dontus in the snow while it continues to fall.
Clip 5: Truck stuck on on-ramp with a slick hill that is being hooked up to another pick up truck to be pulled.
Clip 6: Accident involving a semi and another vehicle near the off-ramp due to slick conditions. Tow truck pulling away from the scene with damaged second vehicle.
Clip 7-9: Scenes from the middle of I-40 of slow traffic and snow covered roads as moderate snow continues to fall.
Clip 10-12: Clips of Oklahoma State Patrol out with two pickup trucks that had wrecked in the middle of the off-ramp and vehicles driving around them.
Clip 13: Video of two vehicle crash on I-40 along the middle median due to slick and snowy conditions.
Clip 14: Video of a truck that lost control and went off the road in the slick conditions with heavy snow falling on the highway.
Clip 15: Video of plow truck plowing the left lane on the highway as heavy snow continues to fall with the truck that went off the road in the background.
Clip 16-17: Winter scenes of heavy snow falling at a Loves and Valero gas stations in Oklahoma City. Blowing and drifting snow is present.
Clip 18: Scene electrical company trucks driving through the intersection with a salt truck in the background and heavy snow continuing to fall on the snow covered roads.
Clip 19: County plow truck turn left in an intersection while putting plow down to begin plowing the road.
Clip 20-22: View from above I-40 of a completely snow covered and drifted roads with very limited visibility, slow traffic, and heavy snow still falling.