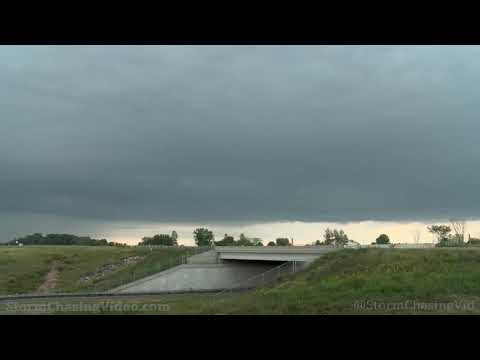 Thunderstorms formed fast up in Washburn County. First 5 clips were taken up by Haugen, WI. The storms formed into a line and raced southwards. Storms also brought in haze, and fog which makes some of the clips seem out of focus. That was how bad the haze, and fog got. The line of storms also brought in heavy rain and some hail. Most of the hail was about the size of nickels. I did run into some one inch hail. No safe place to pull over to get a video clip of it. Been awhile since I see nighttime conditions during daylight time. Yes it was getting towards sunset as well. The lightning with these storms was intense.
Shot Description

Clip 1. Pan shot of the severe warned storms ready to move into northern Barron County by Haugen, WI.
Clips 3-5. Looking at an area of interest east of Haugen. The haze was so bad it was causing problems with the focus. Did what I could do. The haze was that bad.
Clip 6. Some nickel size hail hitting the ground by Rice Lake, WI.
Clip 7. Dashcam footage. Driving south trying to get out in front of the storms.
Clip 8. Still trying to get out ahead of the storm. A close bolt of lightning hit outside the frame. The thunder was so loud it was caught on my dashcam.
Clip 9. Heading towards Cumberland, WI. Getting slammed by blinding rain along with some hail. Some strong winds as well.
Clip 10. Cloud to cloud lightning as the storms were south of Barron County.