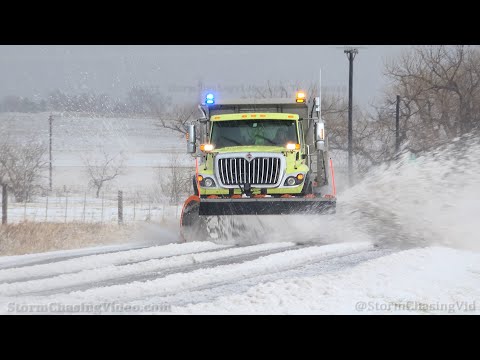 Severe thunderstorms drop three to five inches of hail forcing the use of snow plows to clear the roads in eastern El Paso County in Colo. on April 27, 2021. Later, a nearby supercell would spawn a double tornado for a brief time near Kit Carson.
Shot Description

00:00 – Snow plow pushing up to 6 inches of hail from a severe thunderstorm in eastern El Paso County.

00:34 – Drivers approach a stop sign as hail continues to fall and add to an already healthy hail accumulation in eastern El Paso County.

00:46 – A brief second tornado alongside the main tornado in Kit Carson County.

00:52 – A tornado in Kit Carson County with funnel condensing.

01:18 – Driving down the road with with a dusty tornado in the distance.

01:29 – Intense wind driven dirt and sand whips by and creates zero visibility on a dirt road near Kit Carson.