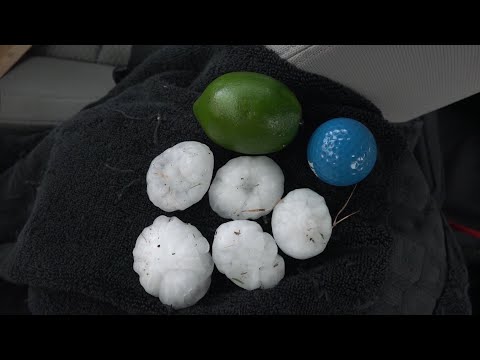 A long-tracked supercell developed in central Kansas just after 3pm and slowly moved south toward the Oklahoma border well into the evening. This storm was responsible for hail reported over 3-inches several times during it’s 7+ hour life-cycle. Tennis-ball size hail fell in the town of Lewis, about 45 miles east/northeast of Dodge City, Kansas. This storm also produced estimated winds over 70MPH which blew over a semi on US-50 just west of Lewis.
Shot Description

00:00-02:30 is the tennis-ball hail falling in Lewis, includes dramatic footage of hail smashing into a roof, falling and covering the ground, and shots of hailstones after the storm.

02:31-03:51 includes shots of the flipped semi just as crews arrived on scene, opening up with first responder running down to the cab to check on the driver. Various other shots of emergency crews pulling the driver out and walking him to the ambulance. The driver was shaken up, but not seriously injured.