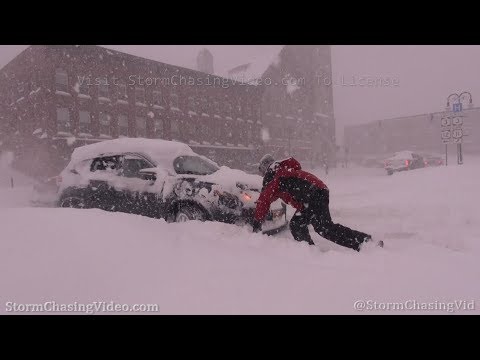 A powerful storm system brought intense snow and strong winds to the Watertown NY area. Numerous vehicles became stuck in the deep snow, and residents helped each other get them free.
Shot Description

SHOT 1: Two people push a stuck vehicle out of a deep snow bank.
SHOT 2: A large tow truck pulls a vehicle free from a deep snow bank.
SHOT 3: A person pushed a stuck vehicle out of a snow bank and back onto the road.
SHOT 4: A person helps to push a vehicle free.
SHOT 5: A vehicle becomes even more stuck in the snow.
SHOT 6 & 7: A large snow plow passes by the camera in deep snow.
SHOT 8: A police officer directs traffic in the middle of blinding snowfall.
SHOT 9: A person walks up a snowy sidewalk and loses his balance on the ice, nearly falling.
SHOT 10: People clear a sidewalk from nearly 2 feet of snow.
SHOT 11 & 12: A man uses a snowblower to clear the deep snow from his driveway.
SHOT 13: Driving by houses buried in deep snow.
SHOT 14: A man uses a snowblower amidst heavy falling snow.
SHOT 15: Traffic lined up in heavy falling snow.
SHOT 16: A man shoveling snow off the sidewalk.
SHOT 17: Two people walk by in yellow jackets during heavy snow.
SHOT 18: Panning shot of the statue in downtown Watertown, NY during intense snow.