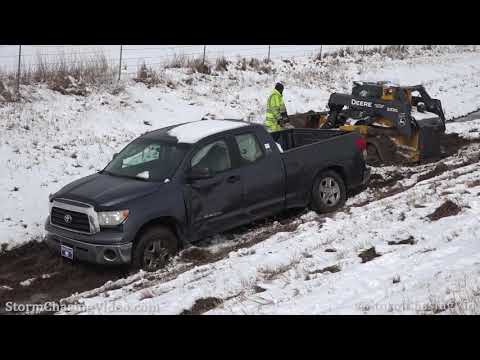 A major winter storm dumped over a foot of snow to parts of central Kansas on Tuesday with many areas seeing the highest snowfall of the season. Two fatalities were blamed on the storm here in Kansas.

Video package shot in western Marion County near Hillsboro, Kansas, which is roughly an hour north of Wichita.
Shot Description

Clip 4: Woman driving the stuck pickup truck gets into another truck of someone who came by to help her.

Clip 5: Man walking around the stuck pickup looking for a place to hook on.

Clip 6-7: Man bringing strap to other pickup truck, then running back to get into stuck pickup.

Clip 8: One truck pulls the other free of the snow.

Clip 9: Another crash scene, this with a red tow truck on scene of a spin-out.

Clip 10: Tight shot of gold car spun off the highway.

Clip 11-12: Wide and tight shots of crash scene from behind the tow truck.

Clip 21: Wide shot of a damage blue pickup truck off the embankment of I-135 with two two trucks up on the hill along the interstate.

Clip 22: Bull-dozer stuck in the snow and mud during the recovery effort to get the blue pickup truck out.

Clip 24: Shot of blue pickup truck with bulldozer trying to get out of the mud behind it.

Clip 25: Tight shot of stuck bulldozer rocking back and forth in the mud.

Clip 26: Another crash scene of a red pickup that was towing a white van stuck in the ditch off I-135 with tow truck on scene.

Clip 28: Shot of crash scene from behind which also shows another white van further up the road in the ditch.

Clip 29: Shot of man walking beside stuck trailer with the other white van behind him.

Clip 30: Shot of two people next to tow truck with other white van in the background.

Clip 32: Shot of a tow truck on scene next to stranded semi truck in median of I-135.

Clip 33: Tighter shot of stranded semi in the median.

Clip 34-35: Tow truck driver dragging line from the tow truck to the semi.