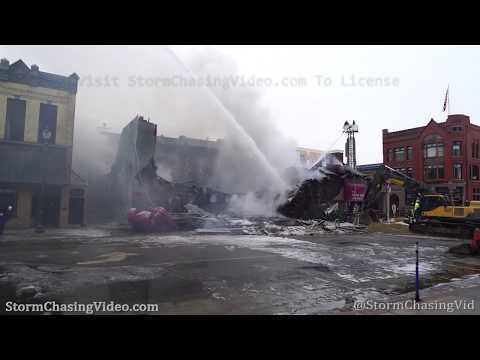 B-Roll footage of the fire that destroyed the historic building that housed The Press Bar and Parlor located at 502 West Saint Germain Street.

Footage includes ground shots as well as footage from the drone overlooking the massive fire scene.

Clip 1 Smashed front of the building.

Clip 2 Flames in the smoke and wreckage of the building.

Clip 3 Wreckage and flames with water being dumped on to try and put out the flames.

Clip 5 Wide wider shot of water being dumped on the fire.

Clip 6 Wide shot of the fire scene in heavy smoke.

Clip 7 Tight shot of Press Bar and Parlor sign in the heavy smoke.

Clip 18 Heavy smoke on the north end of the scene at 5th and St. Germain Street.

Clip 19 Looking through the second story window into the collapsed roof and sky.

Clip 20 Heavy smoke and debris on the road.

Clip 21 Demolition crews from Landwehr Construction looking over the scene before bringing in heavy equipment to knock the rest of the building down.

Clip 22 St Cloud fire truck with icicles hanging off of it.

Clip 23 Stop sign with icicles and fire crews behind it.

Clip 25 Fire Fighter entering Cowboy Jacks building next to The Press as the fire was trying to spread.

Clip 29 Smoke coming out of the top of the building of Cowboy Jacks.

Clip 30 – 37 Demo crews knocking down the upper walls of the building as the fire is still burning.

Clip 44 – 48 Fire continues to smolder as crews begin the demolition work on the building to prevent it from collapsing into the streets.